After four and a half months at sea, the adventure of the Kon Tiki 2 has ended. The participants called for 1000 miles west

help from Chile to be rescued from their plight.

Already in 1947 the Norwegian Thor Heyerdahl wanted to show that the original inhabitants of South America were able to reach the islands of the South Pacific with balsa rafts like his ‘Kon Tiki’.

The journey of the Kon Tiki 2 had to prove that the residents could return to South America by raft. That is the 14 participants, who undertook the expedition on two rafts, failed.

Because of the heavy seas, the rafts and especially the lianas used to make the connections between the tree trunks were so worn that further sailing became impossible.

Yet the leadership does not speak of a failed adventure. The goal was to sail from the South American West Coast to the Easter Islands and back. After only 46 days the Easter Islands were indeed reached. That the adventure on the way back stranded has to do with the for the time of the year very violent El Nino effects on wind and currents. The crews had to deal with very unusual circumstances such as six meters high waves. In total, the rafts have each covered more than 6,000 miles across the Pacific.

There has been quite a lot of work on the usefulness of the company. Scientifically speaking, it is more likely that the Polynesians, not like Heyerdahl at the time assumed from South America, but came from Asia. 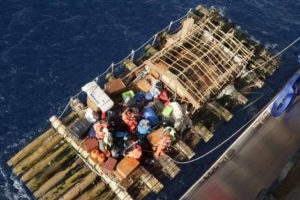 In 2008 Hympendahl and Wharram proved with a homemade catamaran that they could sail 4000 miles against the prevailing wind direction. Such an expedition is currently being undertaken by Burghard Pleske as well. With his pro Ana-Varu he wants to sail thousands of nautical miles through the South Pacific, from Taiwan via Guam to Rapanui, without modern navigation means.