The story starts on a Friday afternoon in the early spring of 1974 in Sybs coffee bar, a café in the Doelesteeg in Leeuwarden, where seven former schoolmates met again after a few years and, while enjoying a few beers.  Several ideas were put forward, which ultimately resulted in building a really big raft. But it remained that day with separate ideas.  After a prosperous trip the raft was officially baptized with the name: “Sterke Yerke”.

Due to a combination of circumstances they could start the construction of the raft a short time later on a vacant lot on the banks of the Potmarge, a river that runs through Leeuwarden. It became a raft, built from mere waste material with a wooden deck of 13 meters long and 5 meters wide. The buoyancy was obtained by 22 oil drums, welded together in two rows of eleven drums. The raft was further provided with two large swords. For the propulsion two masts have been mounted on the deck, suitable for 16 m2 ‘BM-rig’ and 14 m2 ‘freedom gear’. For safety a 30 hp outboard engine is also installed on the raft. On 15 June 1974 the raft left the construction site for her maiden trip to Grouw, armed with enough beer and an electric organ. After a prosperous trip the raft was officially baptized with the name: “Sterke Yerke”.

Yerke is the Frisian word for drake, or male duck, while on the other hand it is also the nickname of a legendary Frisian farmer’s son from Drogeham. Hearke Tjerks Witteveen (1801-1890), better known as Sterke Jerke or Sterke Hearke, a laborer and a policeman. He was also known as the Hercules van Drogeham. He was an exceptionally Sterke but good-natured man.

After more than a year sailing the Frisian waters and the Wadden Sea and participating in the Frisian Eleven Cities Week for boats in July 1975 (the alternative Elfstedentocht for boats), they also wanted the Sterke Yerke to really taste ‘salt water’. The Frisians have always been a seafaring nation and they wanted to sail to England.

Thanks to the many publicity and thanks to the help of two sponsors, they were able to have the raft ‘ready for the sea’. The raft was equipped with a radio receiver and transmission system, a radar reflector, a railing and a new rear mast, so that when the sail was full, approximately 100 m2 of sail could be hanging on the mast.

Furthermore, a watertight shelter on deck was built with an inflatable eight person dinghy and a life jacket for all crew members.

De Sterke Yerke left Friesland via the IJsselmeer and Amsterdam to IJmuiden and left on 22 August 1975 for his first voyage, over the North Sea to London. After two hours of sailing one got to deal with the first setback. The foremast sank through the wooden deck and the forestay cleared. In the harbor of Scheveningen, the battered raft was patched up and left for England again. As soon it turned out that the Sterke Yerke was not strong enough. When everyone was convinced of this, it was decided on the evening of 24 August to put an end to the crossing to England.

The barrels were stuck, but the last remains could not be broken. With a tug from Rijkswaterstaat six times sailed over the raft and then it was no longer a danger for shipping. The following newspaper article comes from the Leeuwarder Courant of June 12, 1974, the first time that the name Sterke Yerke was in the newspaper.

The following newspaper article comes from the Leeuwarder Courant of June 12, 1974, the first time that the name Sterke Yerke was in the newspaper. 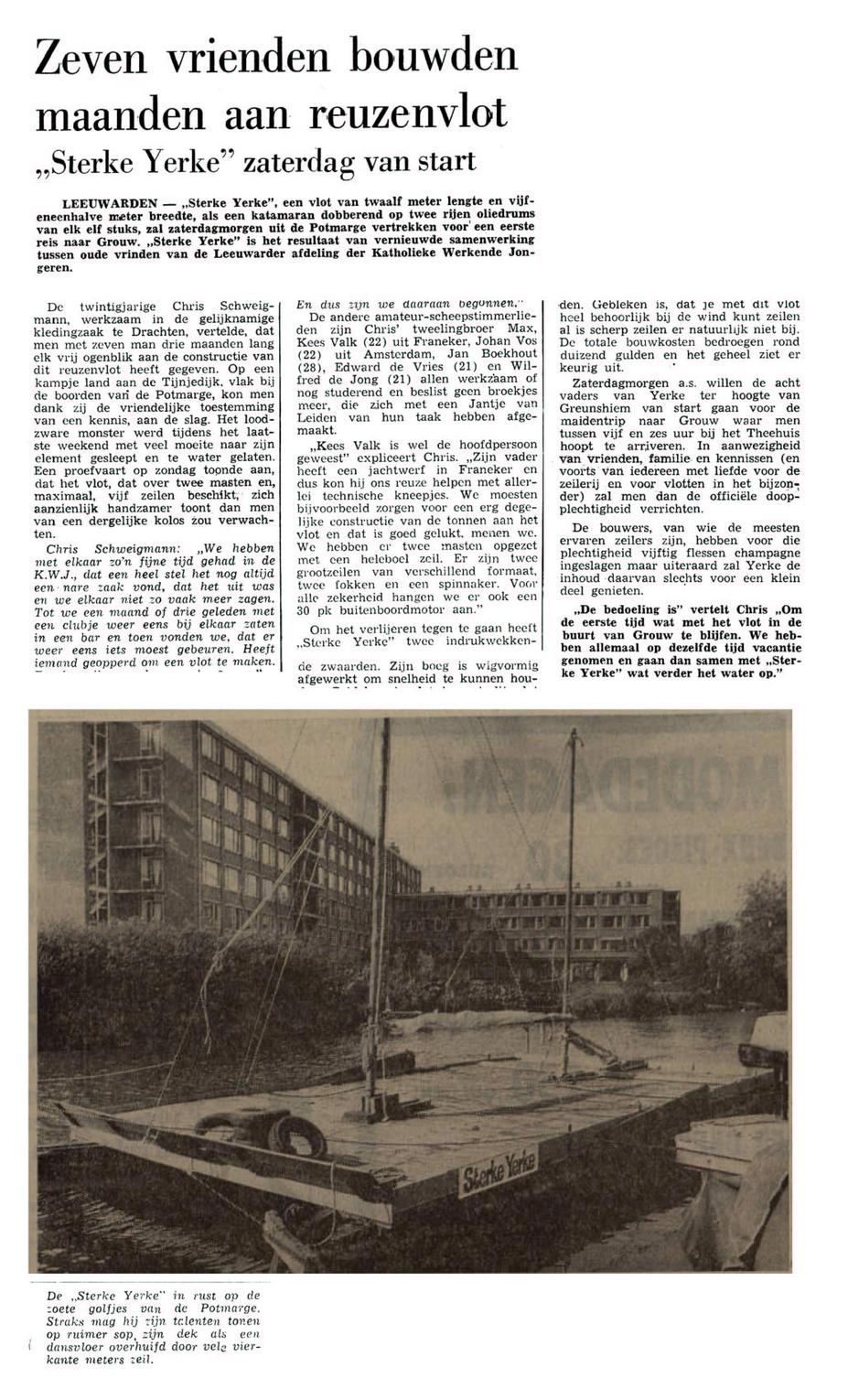